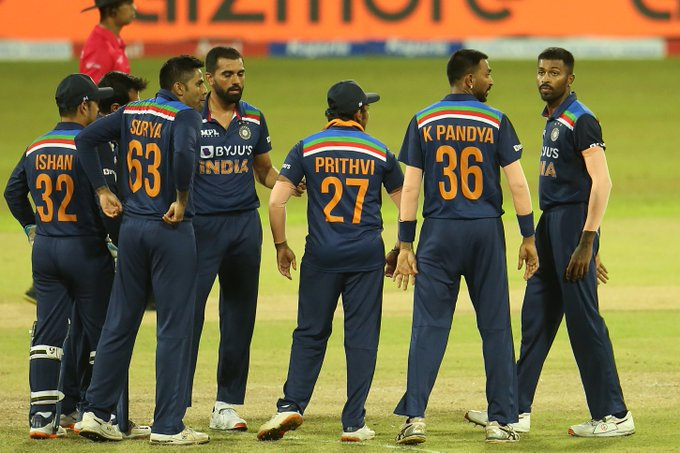 India have won the first T20I against Sri Lanka by 38 runs thanks to a brilliant bowling performance by the duo of Bhuvneshwar Kumar [4/22] and Deepak Chahar [2/24] who claimed six wickets between them to reduce Sri Lanka to 126 in 18.3 overs.

Sri Lanka, at one point, looked like nailing the run-chase, but Bhuvneshwar Kumar ran through their middle and lower order to inflict a 38-run defeat on the home side.

The pick of the batters for Sri Lanka was Charith Asalanka, who scored a 26-ball 44 and while opener Avishka Fernando did score 26, none of the other batters could post anything substantial, restuting in yet another defeat for the Lankans.

Earlier, Sri Lanka got off to a dream start as pacer Dushmanta Chameera knocked over debutant Prithvi Shaw with an unplayable delivery; a fullish inswinging delivery, one that took the edge of Shaw’s bat.

Samson was once again looking good during his 20-ball 27 before he played all around a Wanindu Hasaranga googly to get trapped plumb in front.

Suryakumar Yadav has since then enthralled the folklore with his 360-degree strokeplay against both spinners as well as pacers.

SKY and Dhawan accumulated 62 runs in the next 8 overs before the latter holed out at deep backward square leg for a 36-ball 46.

Surya, however, led the pack with a brilliant 50 but his untimely dismissal and the struggles of Hardik Pandya and Ishan Kishan at the end meant that India could only manage 164 in 20 overs.

Half of India A team is >Full srilankan Team https://t.co/GqaljknqX8 pic.twitter.com/bX5SAYttG6

Player of the match Award for India In Last 2 T20Is

Personally I dont know when I have seen Coach photo has been used for promotion.
Have you Guys ever seen it ???

Slow balls and slow Pandyas keep India down to 164.

Krunal Pandya coming out to bat is another reason I didn't want Hardik to get out. #SLvIND

Absolutely top innings from @surya_14kumar. On a slow track, he had to create shots and it was a very inventive innings.

For a change, Surya was not at his very best with his timing in this innings, yet 50 off 34. Played.

It's never late to show how talented you are .
Well played SKY

Have a look at that shot
Sweep six by Suryakumar yadav#SLvIND pic.twitter.com/DnJf3we9ie

Still new to international cricket, but safe to say Suryakumar Yadav is smashing it on the big stage

His four innings for India so far:

Should he be in India's XI for the #T20WorldCup? pic.twitter.com/TOe4CzGbL6

Most runs for India after 1st 3 T20I innings

Suryakumar Yadav brings up his half century. He is one stylish player

There is an excitement every time he comes to the middle. I can’t wait to see the shots he plays. Enjoyable, entertaining cricket from him always! #SLvIND

Suryakumar Yadav is in red hot form. Hits a fifty. With such stellar performances he's making a strong case for himself in India's XI for the T20 World Cup. Superb innings #SLvIND

Varun’s debut is such a lovely story. As he makes his debut there will be other young cricketers who are playing TNPL currently who are inspired by his journey to represent the country. Both DK and Ashwin have backed him throughout and he Would be very useful in the t20 WC.

Just looking at the Indian team for today, it is clear that Chahal is above Chahar in the pecking order for the T20 World Cup at the moment.

Sri Lanka thought Dharmasena tax will save them. #SLvIND

And they have called him as replacement for England Tests

Incidentally, it was the debut of both the players.#SLvIND

That ball alone should put plans to send Prithvi to England to rest. He's not ready to face that dukes ball.

Prithvi Shaw becomes the first player to open the batting for India men in Tests, ODIs and T20Is before the age of 24. He is yet to reach 22.#SLvIND

The post Twitter Reacts As India Win The 1st T20I Against Sri Lanka By 38 Runs appeared first on CricketAddictor.