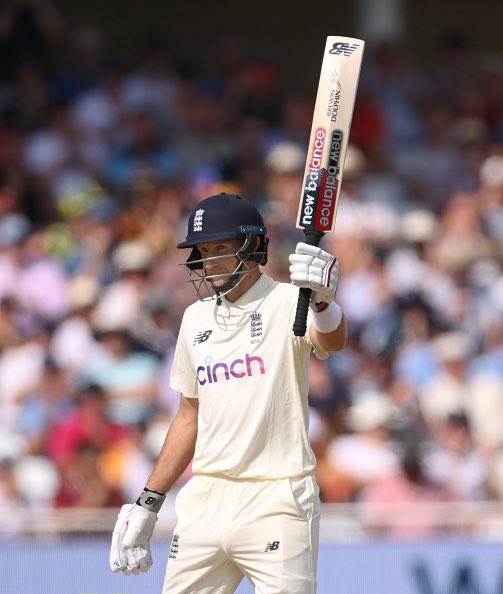 Champion Australian batsman Steve Smith has lauded Ashes rival and England skipper Joe Root for his brilliant hundred in the second innings of the Nottingham Test against a quality Indian attack.

Joe Root, on Saturday, played an innings of the highest class under extreme pressure as he dug his team out of a hole to set India a target of 209 in the final innings of the Test.

Root came to the crease at a time when England had already lost a couple of wickets and they were 39 runs in arrears.

However, on a bright and sunny day and on a pitch that seemed to have flattened out, Root played a brilliant counterattacking knock to peg the Indians back.

Root brought his 4th hundred of the year and his first in England since the 2018 summer with a sublime drive down the ground and the way he celebrated- both hands in the air followed by a pump of fist and a guttural roar- just showed how much this knock meant to him.

Joe Root has been brilliant this calendar year. He smashed a double ton and a daddy hundred in Galle during the winter to help England beat Sri Lanka 2-0

He then followed it up with another double ton in the series opener against India which paved way for a 227-run win for the visitors.

Root endured a dip in form in the last three Tests in India and against New Zealand earlier in the summer but the England Test skipper has started the Indian series with a bang, having racked up a fifty and a hundred.

Steve Smith lauded Root for setting the game up for England with a brilliant hundred besides acknowledging the Yorkshire-born cricketer’s brilliant form this year.

Smith also reckoned that Root may have made some changed to his technique as his balance is looking extremely good.

“Yeah, it was a terrific hundred, obviously setting the game for the final day.  In the last six months, he has been in incredible form. Looks like he has changed something in his set-up, and his balance is really good.  He is batting exceptionally well,” said Steve Smith during a Q/A session on Instagram.

5. Smith on Root's century in on going Ind vs eng 1st test pic.twitter.com/lYjdp5NVNR

The post Steve Smith Reacts On Joe Root’s Magnificent Hundred Against India In The Nottingham Test appeared first on CricketAddictor.