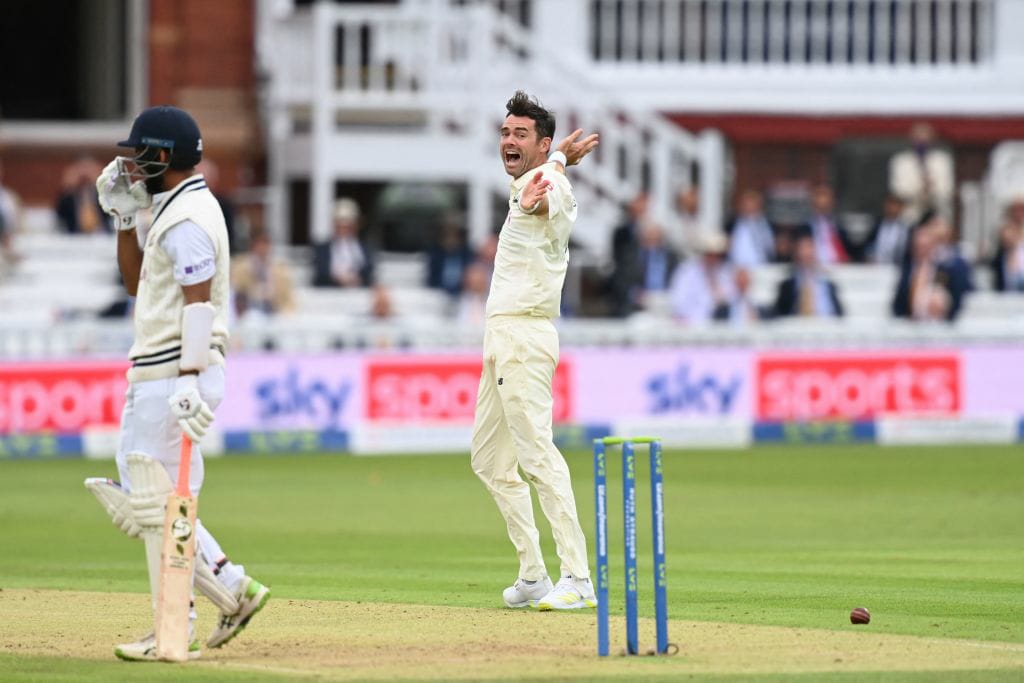 Well! It is fair to say that Cheteshwar Pujara looked like a ‘cat on a hot tin roof’ during his short stay at the crease during the afternoon session of the Lord’s Test.

Coming into the Lord’s Test, there was a lot of scrutiny on Cheteshwar Pujara given his extended lean patch and it seems like that it has started to take an effect on the Indian No.3.

Pujara looked completely out of place during his 23-ball stay at the crease. He looked extremely fidgety, almost like someone who is desperate to get some runs under his belt.

The Indian No.3 survived a close LBW shout-off the bowling of James Anderson when a nip backer pinned him on his pads.

However, he was saved by the impact which was outside off.

But, it wasn’t long before the champion seamer claimed the wicket of Pujara for the ninth time in Test cricket.

It was a brilliant set-up by Anderson where he bowled a series of inswingers and then followed it up with an away-going delivery.

That said, it was an equally poor shot by Cheteshwar Pujara, who needlessly poked at it to give a simple catch to Jonny Bairstow in the slip cordon.

His latest failure is yet another addition to a string of low scores that Pujara has managed in the past six months. It also paints a grim picture of a sharp decline that the gritty batter has undergone in the past two years.

Pujara hasn’t scored a Test hundred since his 193 in Sydney in January 2019.

He did play a significant role in India winning the Test series Down Under but since then Pujara’s highest score in his last ten innings is 21.

As expected, Cheteshwar Pujara is facing a lot of criticism from fans on social media.

Here are some of the reactions:

Pujara hasn’t scored a hundred for 32 months now, has never looked like doing well in England, should be dropped from next Test, getting body blows in Australia shouldn’t guarantee your selection even if you are not making any runs

The only batsman he has dismissed more is Peter Siddle with 11 dismissals.#ENGvIND

Pujara: The same old story.
Next man in: I Hope he doesn't like repeat shows.

Really don't know what to say about Pujara now. Yes, he has got some good deliveries to lose his wicket, but his avg is 25 now for last 22 innings (since 2020).

Some criticism towards him for lack of runs, not necessarily the approach, is justified.

Pressure continues to mount on Pujara. Highest score of 21 in his last 10 innings. Got to go back to Jan 2019 for his last Test hundred, which was his 3rd of the 2018-19 Aus tour. Has been hard work for him since. #ENGvIND

Lowest batting average except lower order batsman since 2020 in this current XI :-

Time to remove walking wicket Kohli from this XI who is getting dragged in this Test team just due to reputation & inject Sky in middle order. pic.twitter.com/mhp4VwIxp9

I love Pujara, really do! Have immense respect for him but he looks a shadow of his former self. Happens with the best and it's painful to see.

That's a worrying innings from Cheteshwar Pujara. He appeared to have totally lost his off-stump. No need to play at that delivery or a number of previous ones. The pressure grows on India's number three #ENGvIND