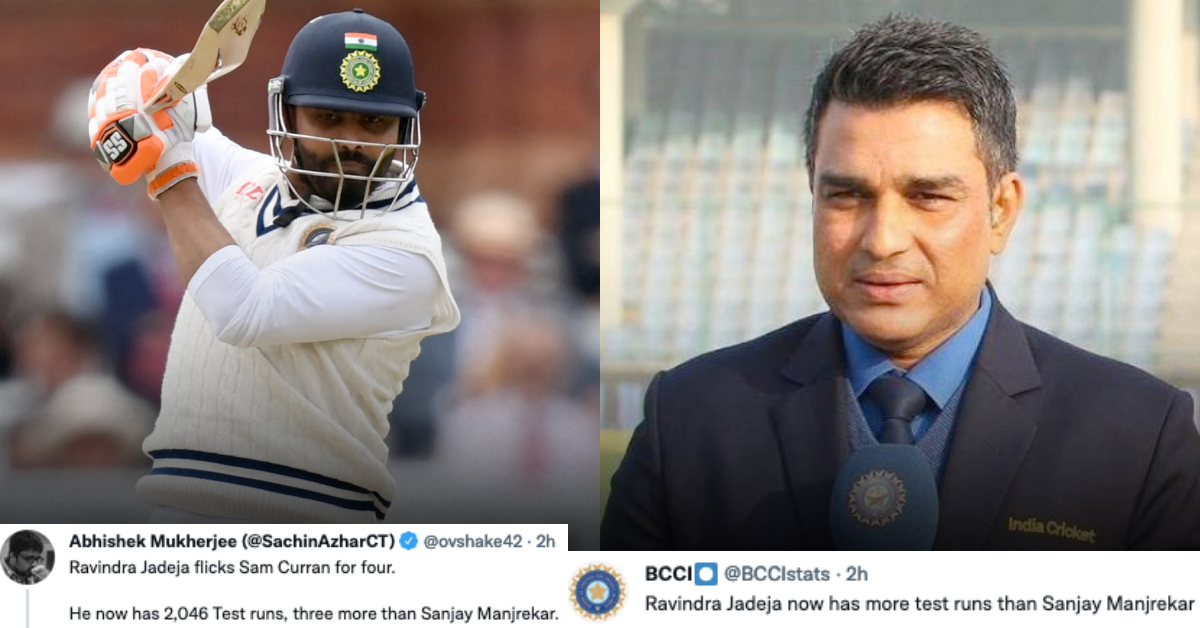 India all-rounder Ravindra Jadeja once again displayed immense discipline in the tough condition against the likes of James Anderson and Ollie Robinson as he and Pant addressed the fledgling ship after India lost a couple of wickets- KL Rahul and Ajinkya Rahane- within the first two overs of the morning session.

And, in the process, the Saurashtra cricketer leapfrogged former Indian batsman-turned commentator, Sanjay Manjrekar in the Test runs tally.

You might be wondering what’s the point of stating the aforementioned milestone but given the history between the duo, it’s no surprise that it became a notable moment on social media.

For the uninitiated, Sanjay Manjrekar had termed Ravindra Jadeja as a ‘bits and pieces’ cricketer during the 2019 World Cup.

Manjrekar’s comment did not go down well with Jadeja as the all-rounder took to his Twitter account to let the former know what he thought of him.

Jadeja then proceeded to put an all-round display against New Zealand in the World Cup semi-final, albeit in a losing cause and Manjrekar admitted after that game that the Saurashtra cricketer had shredded him into bits and pieces.

Prior to the ongoing Test series, Manjrekar didn’t pick Jadeja in his playing XI and he stuck to his point of view despite the all-rounder scoring a crucial half-century in the first innings of the Nottingham Test.

So, when Jadeja did get past Manjrekar’s tally, Twitter users were never going to let the moment go, and in a flash, it started trending.

He now has 2,046 Test runs, three more than Sanjay Manjrekar.

@imjadeja moves ahead of @sanjaymanjrekar in terms of test match runs as well as ODIs
Clearly Mr.Manjrekar has to stop being bitter & criticising Jadeja everytime he comes to bat. He is a serial matchwinner & needs to be treated that way#ENGvINDOnlyOnSonyTen #jadeja #IndvsEng

Runs for India in test cricket

Also Read: They Are Not Going To Rip Their Shirt Off And Create A Scene: Sunil Gavaskar Not Impressed With Constant Criticism Of Ajinkya Rahane And Cheteshwar Pujara