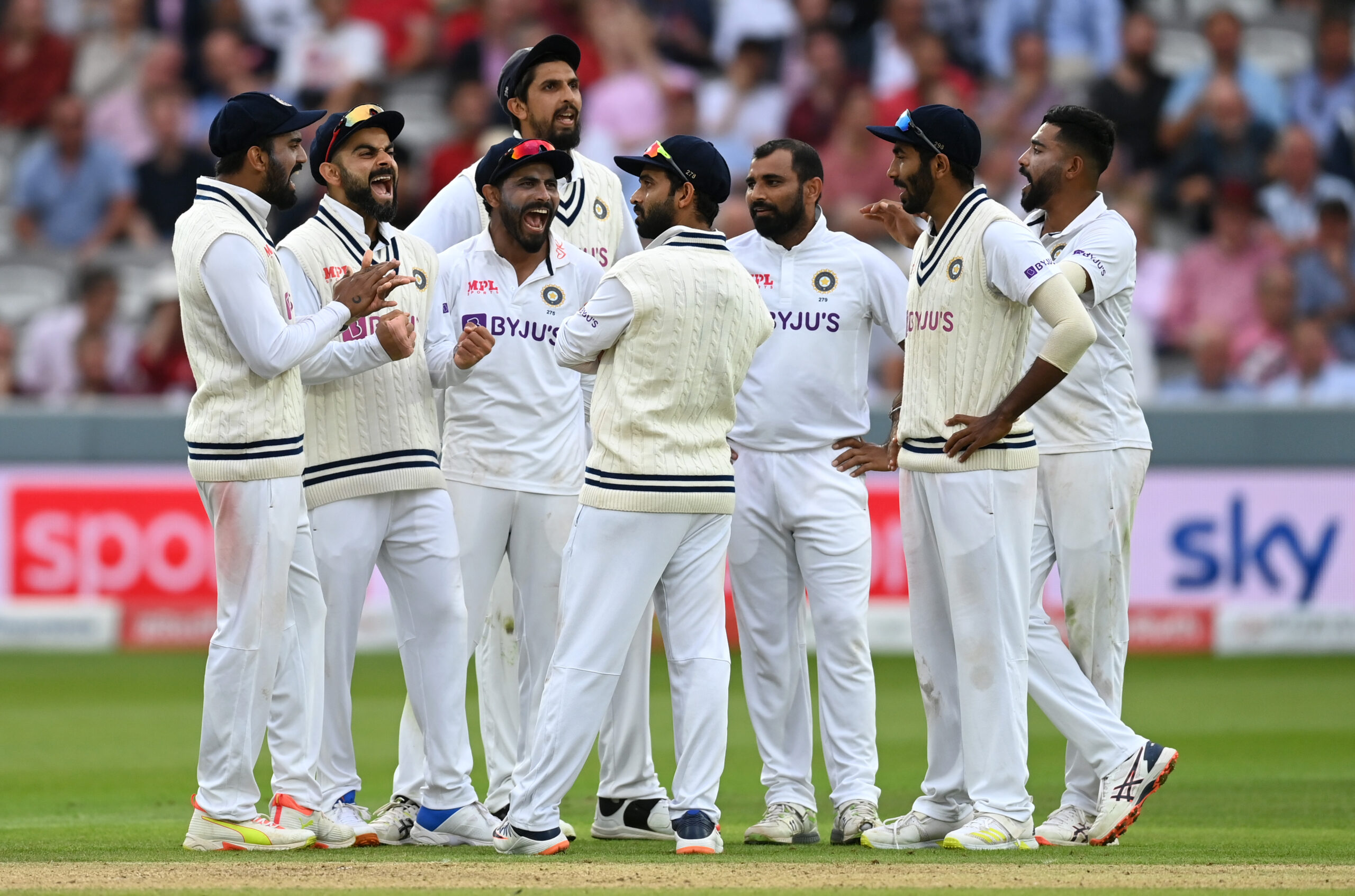 A late wicket by Mohammed Shami of Rory Burns meant that India finished the second day of the Lord’s Test on a high with England finishing at 3/119 with skipper Joe Root holding the fort for the home side.

England bowlers-led by champion seamer James Anderson (5/62) fought back brilliantly on the second day to ensure that India got bowled out for 364.

India lost both their overnight batsmen- KL Rahul and Ajinkya Rahane- within a space of first 7 balls on the second morning but a 49-run-stand between Rishabh Pant (37 off 158) and Ravindra Jadeja (40 off 120) ensured that the visitors did not get rolled over inside the first session.

Pant, however, got out just before the Lunch break as he edged an attempted cut off Mark Wood and he was soon followed by Mohammed Shami.

Ishant Sharma hung around for a while with Jadeja before Anderson came back to dismiss him and Jasprit Bumrah in quick succession.

With only Mohammed Siraj left, Jadeja finally decided to play some shots and he ended up skying an attempted pull which was easily gobbled by Anderson at mid-on.

Anderson completed yet another five-wicket-haul in Test cricket against India as the visitors lost their last eight wickets for 97 runs to finish at 364.

Rory Burns and Dom Sibley negotiated the testing phase before the Tea break but the latter squandered all the hard work as he flicked a leg-side delivery from Mohammed Siraj to KL Rahul at short mid wicket.

One brought two for Siraj and India as Haseeb Hameed endured a golden duck after he played down the wrong line off a fullish length delivery.

Post the back-to-back dismissals, Rory Burns and skipper Joe Root took control of the proceedings as they stitch a brilliant 85-run-stand for the third wicket.

The Indian bowlers- Siraj and Ishant- after having bowled tightly in their first few overs after the Tea break, allowed Root and Burns to get away by dishing plenty of “hit me” deliveries.

Rory Burns played some delightful pull and flicks while Joe Root cashed in on everything that was short or wide.

However, Mohammed Shami provided India a much-needed breakthrough at the backend of the day as he pinned Rory Burns plumb in front courtesy a nip backer.

England finish 119-3, and 245 runs behind India on an utterly compelling day of Test cricket. With Root still there on 49* day three could be a beauty.

The 97/8 might just start showing up its head now! Need a wkt quickly. Else its England's day

Those comical reviews seem to have distracted India. It has been a great start but they need to make it count while on top

Hameed's duck was the 14th by an England top 3 batter in Tests this year – the most top-3 ducks in a calendar year by any team in Test history. https://t.co/nGPu2Kx8ya #ENGvIND

First ball Haseeb Hameed faces in a Test in England, he's out. This is his comeback Test after nearly 5 years. Siraj gets 2 wickets in 2 balls #ENGvsIND

Unsure whether he really was caught at short midwicket in the first Test, Sibley repeats the stroke straight after tea in the second. England 23-1.

English openers to face more than 100 balls per dismissal in home Tests this century (min. 2 innings):

Jadeja would probably bat at 3 for the Proteas.

Another fifer for Jimmy Anderson. Man he’s good. I swear he doesn’t age

Only players with more Test wickets at a better average than Ishant Sharma in the last five years:

Of course. Only Anderson.

James Anderson and that consistency to put the ball in the same place time and again… class.

Jimmy Anderson gets another five-fer, his seventh appearance on the Lord's honours board. Figures of 28-7-62-5. Ridiculous, still.

James Anderson vs India at Lord's

Jadeja is likely to spend a lot of his batting life in Tests with tailenders, currently it's a messed up relationship.

Was doubtful for this Test due to tight quad. Picks a five-wicket haul & has been magnificent. He's nearly 40 & looks better than ever. Champion bowler #ENGvsIND

The entire England XI will have missed a run-out chance by the time this innings is over.

He now has 2,046 Test runs, three more than Sanjay Manjrekar.

@imjadeja moves ahead of @sanjaymanjrekar in terms of test match runs as well as ODIs
Clearly Mr.Manjrekar has to stop being bitter & criticising Jadeja everytime he comes to bat. He is a serial matchwinner & needs to be treated that way#ENGvINDOnlyOnSonyTen #jadeja #IndvsEng

Runs for India in test cricket

England get a big wicket of Pant. Can India get to 400? Jadeja is the key as India have a longish tail #ENGvsIND

1 wicket from the Tail now! Could bowl India out for 300 here if we get it right! Then go get 500… the plan falling into place?!

Rahane is a baffling batter to understand. Gets a match defining hundred when you least expect it, and then just goes completely missing. Fair to say you'd expect a lot more from someone who has played 75+ Tests. #ENGvIND

Ajinkya Rahane remained not out for a day. Can't ask for more. #Engvind

James Anderson and Ollie Robinson have shared 14 of the 16 Indian wickets to have fallen in this series. #ENGvIND pic.twitter.com/vgL0QPNPTG

Pant and Jadeja are batting for Pujara and Rahane’s place in the team.

No words to describe Rahane's dismissal. Just so damn disappointing.

Supporting someone in their bad time is alright but it's hilarious the way Gavaskar feels that the talks about Ajinkya Rahane's form are all made up.

Not only he isn't scoring runs, ye is also looking unsure and finding ways to throw wickets. Sunny G has lost his objectivity!

Well played KL Rahul. Sad to see people going after Pujara and Rahane when Rahul clearly said he has scored on behalf of his mates as well.