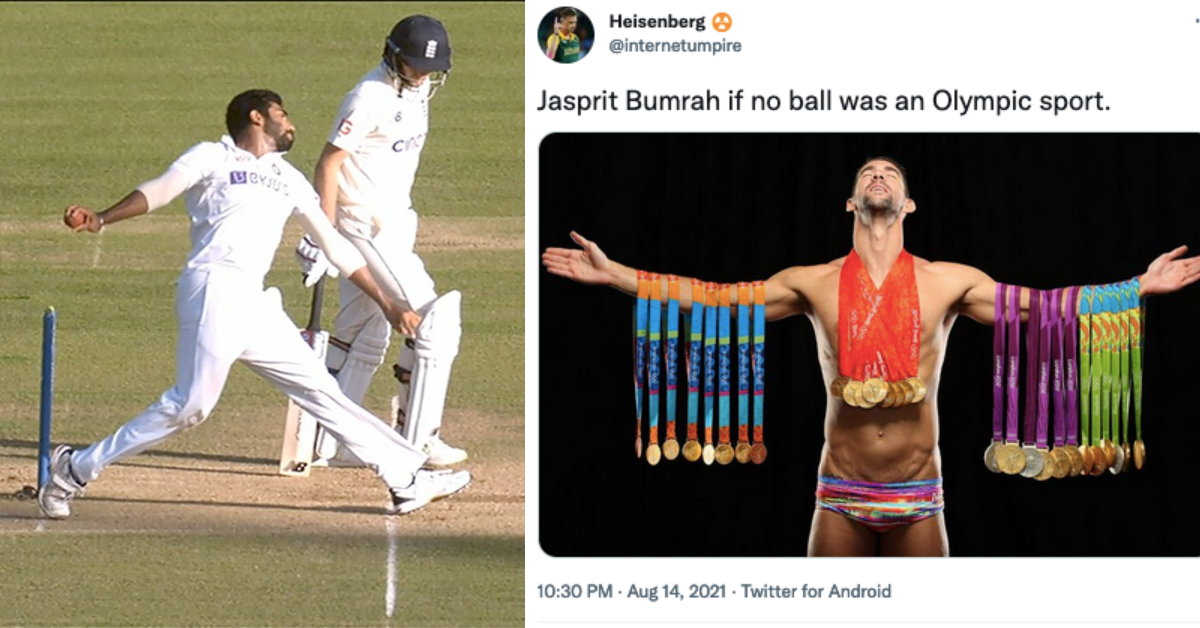 One could be forgiven for confusing Jasprit Bumrah’s last over of Day 3 at Lord’s as part of The Hundred tournament as India‘s spearhead pacer bowled 10 balls in it to James Anderson. The extended over was a result of the speedster bowling four no-balls in a single over.

Out of the 17 no balls Indian bowlers bowled in England’s first innings, Jasprit Bumrah accounted for 13 of those; according to ESPNcricinfo’s stats, it was the highest in an innings for an Indian bowler since Zaheer Khan’s 13 no-balls in Guyana in 2002.

The 126th over of England’s innings, bowled by Jasprit Bumrah, will now, apart from criticism, come into plenty of debate as well. The Indian seamer hurled down a barrage of bouncers, most into the body, towards Anderson, a number 11 batsman with a batting average of less than 10.

Netizens were quick to bring out the rule book as well, suggesting that the umpire should have stopped Jasprit Bumrah from bowling such lethal short deliveries as it stood a chance to injure Anderson; one of the bouncers even hit the batsman on his head.

Jasprit Bumrah already has a reputation of crossing the line – on the bowling crease, to be clear here – while bowling, and that has at times cost his side, whether India or Mumbai Indians – the reprieve he gave to Fakhar Zama in the 2017 Champions Trophy final still is hurtful for Indian fans as Zaman went on to score a match-winning hundred.

Eventually, one of the no-balls of Mohammed Shami helped India as he got rid of Anderson, the last wicket, on the last ball of the day after his over was extended as he had bowled a no-ball earlier in that over. The hosts finished the day 27 runs ahead of India’s total with skipper Joe Root scoring little less than half – 180 runs – of India’s total.

Twitter was quick to come up with jokes and memes on the no-ball fiasco of Jasprit Bumrah, who returned wicketless after at Lord’s in the first innings, after having picked a five-fer in Nottingham in the first Test.

Here’s how twitter reacted to Jasprit Bumrah’s no-balls in the Lord’s test:

Bumrah has scored more runs for England than Rahane, Pujara combined for India.

Jasprit Bumrah's 10 no-balls is the most in a day of Test cricket for more than a decade. #ENGvIND

Bumrah : No wickets. No balls.

No way Bumrah has bowled more no balls than runs scored by Pujara, Rahane, Bumrah, Shami and Siraj combined

15 minutes taken to complete the last over of Bumrah.

Get Bumrah in the Hundred with that 10-ball over

Jasprit Bumrah if no ball was an Olympic sport. pic.twitter.com/o8sbfLNF75

Bumrah is bowling his all no balls before going to UAE.

Wtf is Bumrah doing , it's just too much dude. Bumrah has bowled 13 no balls in this Innings

Lead would have been only 3

This over of Bumrah lasted longer than Pujara and Rahane innings.

10 ball Bumrah over, the impact of The Hundred is phenomenal #ENGvIND

Bumrah's son: Dad can i go to goa?
Bumrah: pic.twitter.com/lDiDJOjlxU

All these consecutive no balls to Anderson would seem fishy if it was anybody but Bumrah.