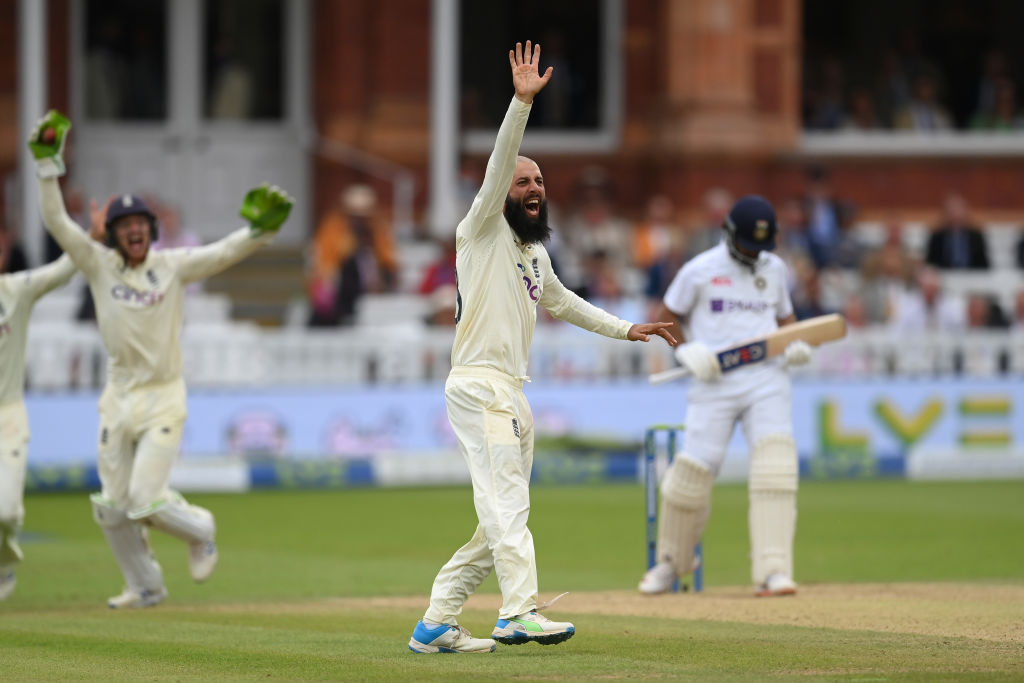 Bad light forced an early end to the 4th-day proceedings in the Lord’s Test but not before England broke the back of India to put themselves in a serious position of strength as the visitors ended the day with an overall lead of 154 runs with Rishabh Pant the only recognized batsman left.

India started their second innings on the fourth morning and their first objective was to make sure that they wipe out the 27-run deficit without losing either of their openers.

However, by the time they reached there, both KL Rahul and Rohit Sharma were back in the hut.

KL Rahul looked uncomfortable against deliveries outside the off-stump and he even perished at the score of 5 when he nicked a good length delivery bowled by Mark Wood to Jos Buttler.

Mark Wood was really impressive on the fourth day. Not only did the pacer hit the deck and hard to dish out some chin music to Rohit Sharma and the likes but he also pitched it up to constantly challenge the outside edge.

He persisted the short-pitch stuff against Rohit Sharma despite getting pulled for a six and his persistence paid off as the Indian opener once again failed to control the hook shot and ended hitting it straight down deep square leg’s throat.

Virat Kohli played some cracking drives during his 30-ball 21 but once again his penchant to poke at deliveries wide of off-stump led to his demise, this time against Sam Curran.

All of a sudden, India were 3/55 with two out-of-form batsmen in Cheteshwar Pujara and Ajinkya Rahane in the middle.

The next 1.5 sessions saw India’s two senior pros grinding it out in the middle on a benign surface.

Pujara took 35 balls to get off the mark, 100 balls for his first 12 runs and 200 balls for 40 runs and each time he was greeted with thunderous applause from the Lord’s crowd.

Ajinkya Rahane looked fidgety at the crease, especially against Moeen Ali. He even got a lucky receive when Jonny Bairstow dropped his catch at point.

However, the Indian vice-captain dug in, did the hard yards and as his innings progressed, out came his signature strokes.

Rahane completed his first 50 since the Chennai Test earlier this year as the partnership crossed the 100-run mark.

Pujara, however, fell five runs short of his 50 thanks to a brute of delivery; one that landed on the back of length kicked off rapidly towards Pujara

All Pujara could do was awkwardly fend it to Joe Root, who took the easiest of the catches at a widish second slip.

The wicket of Pujara opened the floodgates for hosts as Ajinkya Rahane fell to Moeen Ali before Ravindra Jadeja was undone by the off-spinner with a delivery that landed on middle, beat his outside edge before hitting the top of off-stump.

The day was eventually called off due to bad light with India finishing at an overall lead of 154 runs.

Here’s how Twitter reacted to Day 4’s play between England and India at Lord’s:

India can still save the Test #INDvENG

That's rubbish. Test cricket shooting itself in the foot again. If Joe Root wanted to bring on a seamer he was naive. If not and they've just come off with spin on that is very poor….

"We weren't allowed to bowl the seamers and Joe wanted to so we had to come off. It's going to be a tight game in my opinion and 10, 15, 20 runs could be crucial, so with the new ball tomorrow morning, we're in a good position." – Moeen Ali speaking to @SkyCricket.#ENGvIND pic.twitter.com/RlzOGpik4L

Both Pujara and Rahane go before the second new ball. India's lead is 140. A huge final 50 minutes of the day remain.

A 100 run partnership by two guys who had their careers in the line. Match was at a critical juncture.
Have kept india in the game. Just. But still in the game.

Like or loathe his batting style, Pujara is a fighter & someone you want in your test side. #ENGvIND

Can there still be a result in this test match at Lords or will it be a draw ? India need 250 runs ahead to declare – but time running out. Terrific character shown by Pujara & Rahane to fight back & put India ahead !!! Love the ebs & flows of test cricket. @SkyCricket !

This is a very imp 50 for @ajinkyarahane88 hugely significant from the perspective of his career as well. The job isn’t done yet. #INDvENG

A very good fighting 50 for Rahane. Not the first time he's made tough runs at Lord's.

False shot percentage against Rahane and Pujara in this innings:

Pujara will get a lot of flak if he gets dismissed but amazing how he manages to block all the outside noise and trusts his method that is most likely to give him success.

A gritty stand between @cheteshwar1 & @ajinkyarahane88 is going strong.

A cut shot from Pujara.

India 49-0 from 28 overs in that session. To call it old-fashioned would be to risk a writ from the 19th century. But I quite enjoyed it. Pujara and Rahane, both out of nick, have basically taken a session out of the game. India 105-3, a lead of 86.

No wickets but very few scored so the pressure remains. These two need to keep at it. Good to see fight and the effort to get some form back. #INDvENG

Let me tell you a kutti story.. The main character is missing.. #ENGvIND pic.twitter.com/fSmNYih6Cx

Cheteshwar Pujara reached 11* (100) at the Gabba earlier this year, and has just reached 12* (100). They are his two lowest totals at this stage of an innings. #ENGvIND

Why aren't the commentators talking about this? pic.twitter.com/8BA49Gqf9b

When he’s at peak confidence levels, Cheteshwar Pujara would have put away both of the last two short of length deliveries he’s faced from Sam Curran for four. That he didn’t here is a glimpse into his mindset more than his batting form #EngvIND

Cheteshwar Pujara has spent 871 deliveries waiting to get off the mark in Test cricket. The only men to spend more time on 0 since Pujara debuted, are Alastair Cook (978 balls) and Joe Root (972 balls). #ENGvIND

I fear this game might have taken a decisive twist. I fear too about the patterns appearing in dismissals.

This test series is intoxicating and engrossing. Great moment by the Lords crowd as Pujara got off the mark

Getting out caught in the deep with two fielders behind square is the same as getting caught in the slip cordon loosely driving a ball outside off. Just that one looks more silly than the other.#ENGvIND

Definitely not the start we wanted. Lots of pressure now to save this game

We have all waited for a Kohli 100, today would be the best day! Come on! Come on!#INDvENG

Nah!! That was just not on Rohit. Nah!

Six And Out is a good deal for England. In trouble now.

Wow, what an absolutely abysmal dismissal by a test opener in a tight, tense match. Huge pressure on the fallow middle order now.

KL wasn't comfortable at the crease today. Big Wicket before the lead has been erased

Mark Wood with an early breakthrough for England!

Bit of uneven bounce early to add an extra element to this Test.

Bit cloudy in London. Ball will move a little bit today. To India’s right handed batters, nipping it down the slope from Pavillion End. Bowled, LBWs, top edge the bouncer will be a huge threat. Slight advantage England I feel. 2 wkts with new ball would be huge with long tail