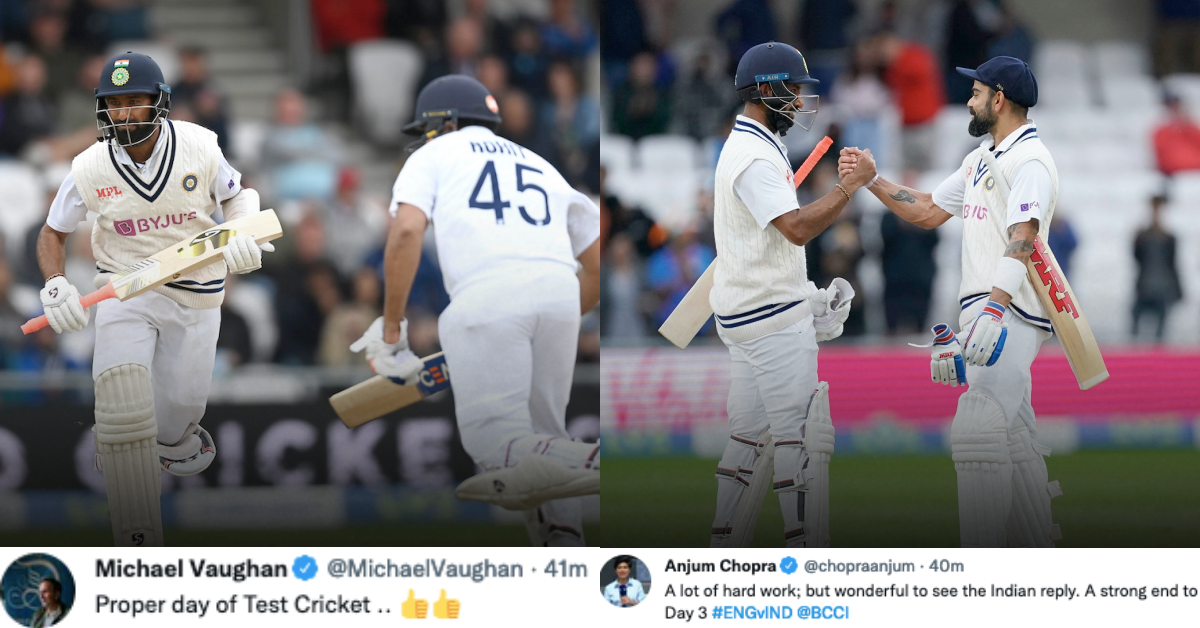 Barring Jarvo 69’s second appearance in the series, nothing much untoward happened on Day 3 of the Headingley Test between England and India. The day trickled by slowly, with Indian batsmen finding their groove.

Going into the third day, England had a couple of wickets to extend their already-big lead. However, they were knocked over after adding just nine runs to the overnight total, folding up for 432 and ending with a lead of 354 runs.

Having come up a cropper in the first innings, the Indian batsmen were under severe pressure to perform and save an embarrassing innings defeat. The opening duo of Rohit Sharma and KL Rahul did the same.

They were watchful in the beginning, just like they have been in the first two Tests, and got the scoreboard moving before Rahul was sent back by a brilliant Jonny Bairstow catch at second slip.

Rohit kept playing fluently, and Cheteshwar Pujara joined him at the crease. The latter showed intent early on, hitting a flurry of boundaries. Rohit slowed down a bit and fell to Olle Robinson, not before adding 59 valuable runs.

The sun was out and the pitch had flattened out quite a bit. Batting had certainly become easier but the mental load that the middle-order was carrying could have been too much. However, the resolve the team has developed in recent times came into play.

Skipper Virat Kohli, having scored only 69 runs in four innings this series, displayed signs of his usual self, driving crisply and safely saw the visitors through to stumps at 215/2. Pujara was batting on 91 while Kohli had made 45. The Men in Blue trail by 139 runs in the second innings, with eight wickets left.

Twitterati enjoyed the ‘moving day’, and also celebrated the Indian batting resurgence. They were bowled out for a paltry 78 in the first innings, but have shown no signs of scarring so far.

Here are the reactions to Day 3 of Headingley Test between England and India:

A lot of people might think that @cheteshwar1 was ultra aggressive.. But it was a case of not missing out on putting away loose deliveries at any stage of his innings..#ENGvIND

Imagine the outrage if the same guy invade the field twice in India. #wontbefunny

Mental fortitude at its best @cheteshwar1

A lot of hard work; but wonderful to see the Indian reply. A strong end to Day 3 #ENGvIND @BCCI pic.twitter.com/A38dmFA5CC

After rather two difficult days, a very good day for India at Leeds today.

A valiant display of mental strength and grit from @cheteshwar1 Pujara , a solid start from @ImRo45 and @imVkohli looking very very good as well. Looking forward to an exciting day tomorrow.#IndvsEng pic.twitter.com/PnMex5VcpR

Kohli seems to have learnt his lesson
Blue dots – all the ones he left today
Red dots – Dismissals this series #INDvENG #INDvsENG pic.twitter.com/XBbmQIXeMy

Life will you two innings. If you do mistake at the first, don't do it in the second. If this Test match goes into Day 5, Well done Team India and Well done Virat Kohli.#engvsindia #HeadingleyTest #pujara pic.twitter.com/19LA5wR2On

Stumps on Day 3. A great day for Indian top order, Rohit Sharma earlier played a superb knock. Then Cheteshwar Pujara and Virat Kohli put on a masterclass. Pujara remains unbeaten on 91, Kohli marching towards a fifty as he remains not out on 45. pic.twitter.com/cyarq9khXY

Multiple pats on the back, slaps to the hand from Virat Kohli and the entire dressing-room on their feet with big smiles tells you this knock of Pujara’s meant as much to the Indian team as it did to him #EngvIND

. . Together we will defend this . Keep it up #INDvEND @imVkohli pic.twitter.com/0Z5Ekw8KRn

Great fightback from India. Other teams would have surrendered today itself. Still long way to go. But India and comeback has been a great love story in the recent days. Lets see. Tomorrow's first hour will be crucial.

After rather two difficult days, a very good day for India at Leeds today.

A valiant display of mental strength and grit from @cheteshwar1 Pujara , a solid start from @ImRo45 and @imVkohli looking very very good as well. Looking forward to an exciting day tomorrow.#IndvsEng pic.twitter.com/KvQf8E2axp

Great to see pujara back in form at the right time. This is the perfect situation for india to make a come back , waiting for tomorrow to see pujara and kohli's ton . #pujara #Kohli #ENGvIND #INDvsEND #Cricket

Cheteshwar Pujara today 91 not out at the close of play.
Only once before in his Test career, he was overnight unbeaten in the 90s.
Was on 98* also against England at Ahmedabad in Nov 2012
The next day he reached 206*#ENGvIND #EngvsInd#IndvEng #IndvsEng

The post England vs India 2021: Twitter Reacts As India Puts Up Sturdy Fight On Day 3, England Still On Top appeared first on CricketAddictor.