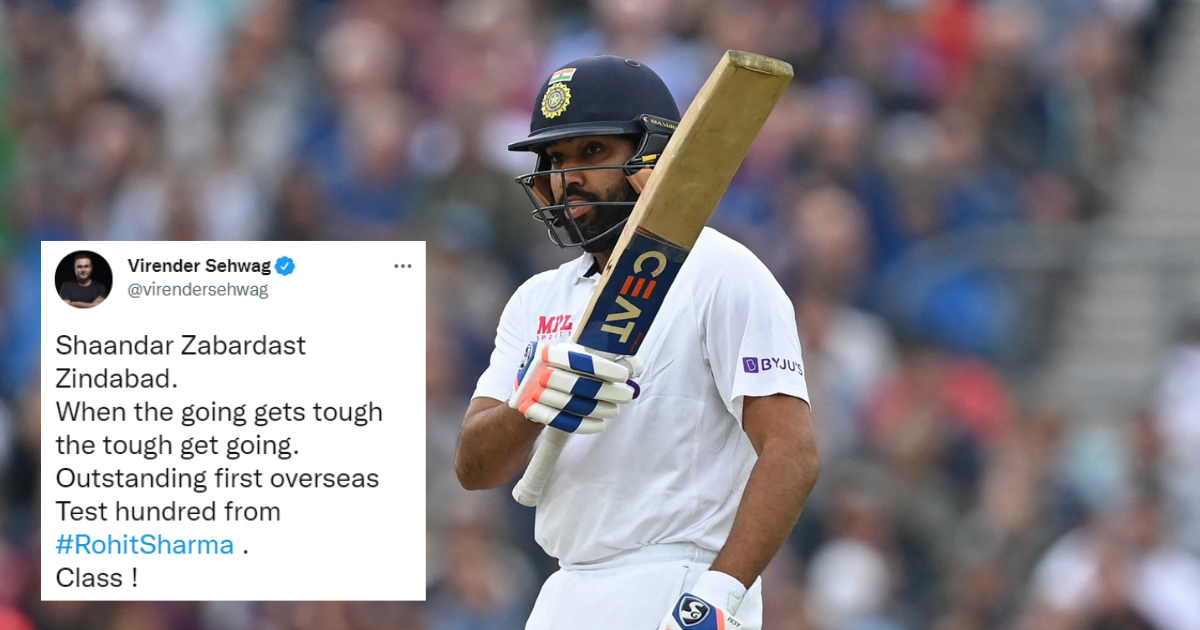 Indian opener Rohit Sharma reached his first overseas hundred during India’s second innings at The Oval. He crossed the 100-run mark in style with a gigantic six off Moeen Ali.

At the start of the day, England had its nose ahead. Overnight batsmen KL Rahul and Rohit had taken India to safety the previous evening, but there was still work to be done. The duo started out calmly, milking runs off freebies while respecting the good ones.

Rahul, having survived an LBW decision early, fell to James Anderson soon but not before contributing 46 to the total. Cheteshwar Pujara then joined Rohit at the crease and they started to up the ante. The former, in particular, batted with intent and took on the aggressor role.

Rohit was happy to play second fiddle, reaching his fifty after Lunch. He looked stoic and determined to make the most of his start, having failed to do so on two previous occasions. Rohit targeted Moeen Ali in particular, dominating the spinner with his wide array of strokes.

As Tea was approaching, the Mumbaikar decided to pick up the pace further. He played a beautiful Nataraja shot off Anderson to get into the ’90s. The very next over, Rohit danced down the track to Moeen and smoked the ball over long for a huge six to get to his hundred.

It was his first on foreign soil and his eighth-century overall. The knock included 12 fours and a six and put India in the driver’s seat. At the moment of his century, India was leading by 96 runs, with more than 7 sessions left in the Test.

As expected, Twitter was overjoyed with his performance and lauded the batsman. Rohit has looked the second-best batsman on this tour so far after English skipper Joe Root, and deservedly got to his hundred.

Here are some of the reactions to Rohit Sharma’s century:

Century for Rohit at the Oval

The transformation of #RohitSharma into a world class opening batsman has been staggering. This century was inevitable given the way he has batted in this series. Privileged to see this. Class.

What a way to bring up your first overseas century! Take a bow, Rohit Sharma. What a brilliant hundred.#ENGvIND

What a brilliant innings! So much time and poise https://t.co/604E9JaAxN

#Rohit Sharma is in the best phase of his batting. Full stop.

Also Read– England vs India 2021: The Right Decision Was Made By The Umpire On KL Rahul’s Wicket – VVS Laxman