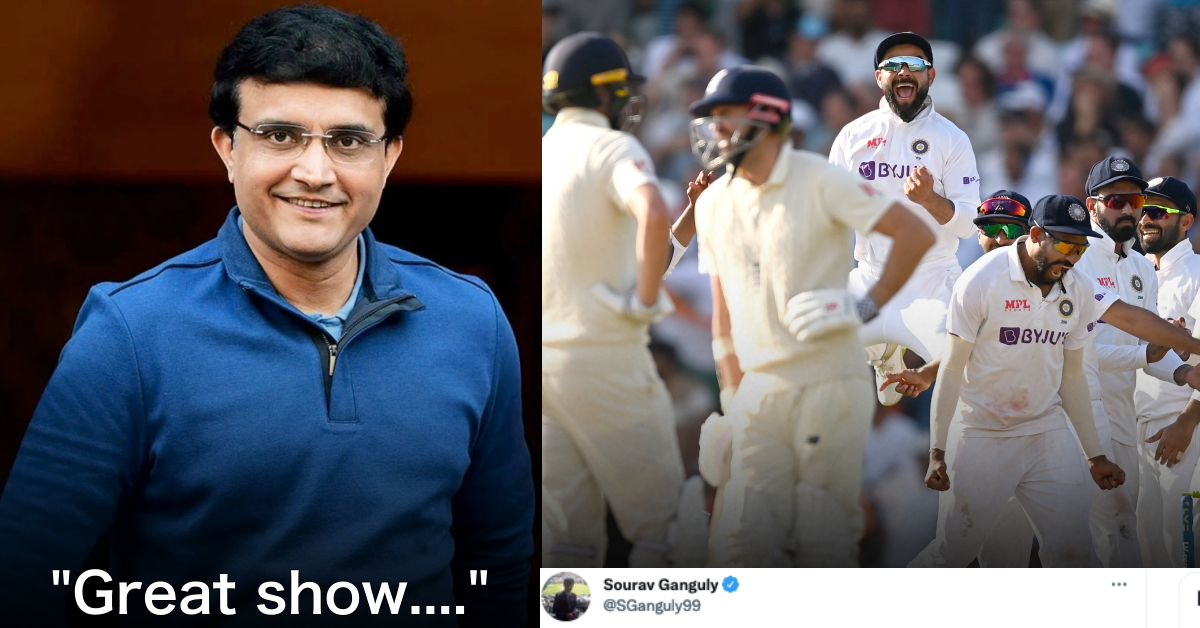 Former India captain and BCCI President Sourav Ganguly was over the moon after India beat England at the Oval in the fourth Test match of the ongoing series by 157 runs and extended the lead by 2-1 with only one Test match remaining to be played in Manchester.

Indian team showed tremendous spirit to come back in the Oval Test after they were asked to bat first as Joe Root won the toss. England did well to bowl out India for 191, but it could have been much lower, if not for Virat Kohli’s 50 and Shardul Thakur’s 57.

England couldn’t do much more as they managed just a 99-run lead after being restricted to 290 in their first innings. Ollie Pope made 81 and Chris Woakes scored a fifty after taking 4/55 in India’s 1st innings. Umesh Yadav, the comeback man, was the star with three wickets, while Jasprit Bumrah and Ravindra Jadeja picked two wickets apiece.

The second innings proved to be the difference as India batsmen applied themselves, especially Rohit Sharma, who registered his maiden overseas Test century as he made 127. He got support from Cheteshwar Pujara, who made 61, Virat Kohli, who scored 44 and KL Rahul, who made 46 runs.

With the lead just hovering above 210, Shardul Thakur and Rishabh Pant added 100 runs and took India to an above-par lead. Thakur made his second fifty in the Test, while Pant showed rare restraint for his 50. Even Umesh Yadav (25) and Jasprit Bumrah (24) helped India with 49 runs as the final total read 466 and England had to chase 368 runs.

The chase got off well as both openers Rory Burns and Haseeb Hameed made fifties and added 100 runs. But then Umesh Yadav (3/60) and two wickets each from Bumrah, Shardul, and Jadeja, put pressure on England batting which collapsed, especially after Joe Root fell for 36.

Bumrah bowled the spell of the match in which he removed Ollie Pope for 2 and Jonny Bairstow for a duck with a searing yorker. In the end, England was bowled out for 210 runs and lost the Test by 157 runs. India went 2-1 up in the series with one more Test to go.

BCCI President Sourav Ganguly was elated with the victory and said that it was a great show from the Indian team and that Indian cricket was far ahead than the rest.

“Great show ..The skill is the difference but the biggest difference is the absorbing power of pressure..indian cricket is far ahead then the rest,” Ganguly tweeted.

Great show ..The skill is the difference but the biggest difference is the absorbing power of pressure..indian cricket is far ahead then the rest @BCCI

Also Read: England vs India 2021: We Are Not Looking To Survive, We Are Here To Win – Virat Kohli After Oval Win

The post England vs India, 2021: BCCI President Sourav Ganguly Reacts To India’s Victory At The Oval appeared first on CricketAddictor.