England vs India, 2021: All Indian Players Test Negative For Covid-19 Ahead Of 5th Test In Manchester 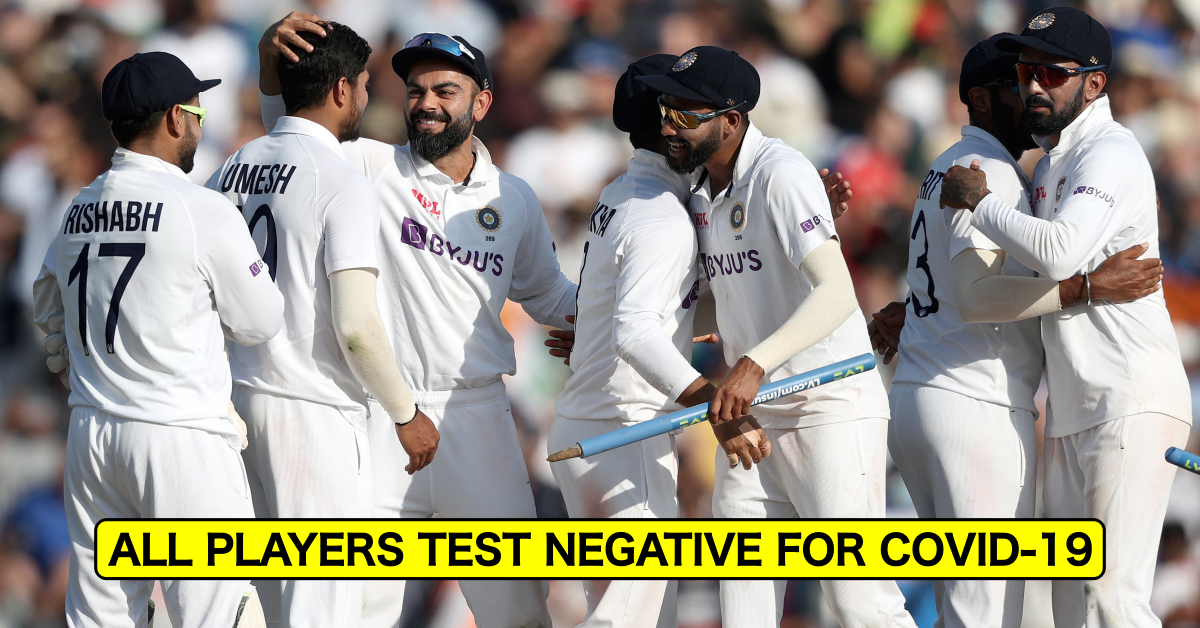 The Entire Indian team squad currently present in Manchester has tested negative for the dreaded COVID-19 virus in the RT-PCR tests that were done on Thursday morning. This brings relief to many of those who have been waiting for a mouth-watering contest between England and India in the 5th Test at the Old Trafford Manchester.

There are still doubts over the fifth Test match, in the series in which India leads 2-1 after wins in Lord’s and the Oval. This comes after Team India’s assistant physiotherapist Yogesh Parmar tested positive for COVID-19 on Wednesday evening after the entire squad had spent the day in practice sessions.

The England and Wales Cricket Board (ECB) canceled the sessions for Thursday and the entire Indian contingent was asked to remain inside their hotel rooms and RT-PCR testing was done.

On Thursday morning the BCCI’s top brass conducted a virtual meeting with the Indian team management including captain Virat Kohli and head coach Ravi Shastri to figure a way forward. ESPNCricinfo also reported that Indian players remain concerned although they have left the final decision with the BCCI.

Throughout Thursday, the BCCI engaged with the ECB trying to find a solution to take things forward. When the subject of canceling the match came through, the England board is understood to have made it clear that it would interpret any refusal to play as a forfeiture. This would have meant that England would win the Test match and square the series, despite India having a 2-1 lead.

The BCCI was not in favor of this happening and the Indian team members were also keen to play. If the match was canceled, the BCCI would also suffer lost revenue from broadcasters and the venue. The lost revenue could be up to £30 million (INR 306 crore).

This wouldn’t have been as per the rules of the ongoing World Test Championship, as according to the WTC playing conditions, a Covid-19 outbreak within a team is allowed as an acceptable reason for a Test to be abandoned – and not forfeited.

In the scenario of the final Test not being played, India would pocket 26 WTC points while England will have 14 out of 48 points available from four Tests.

Another concern for the BCCI was the cascading effect it would have on the IPL 2021 which begins on September 19th five days after the Manchester Test. The bulk of the England and India players are scheduled to board chartered flights to Dubai to join their franchises.

The BCCI does not want the IPL to be impacted as it is scheduled to host the men’s 2020 World Cup in the UAE and Oman two days after the IPL ends, on October 15.

Also Read: India vs England 2021: At Present We Are Expecting The Game To Go Ahead, Says Jos Buttler Amid Covid-19 Cases In Indian Camp

The post England vs India, 2021: All Indian Players Test Negative For Covid-19 Ahead Of 5th Test In Manchester appeared first on CricketAddictor.