IPL 2021: CSK vs MI- Match Preview. Two of the most successful teams in the history of IPL, Chennai Super Kings and Mumbai Indians are set to take on each other on 19th September 2021 to mark the resumption of the second phase of IPL 2021. Both sides played their last games against each other on 1st May 2021.

A sensational batting effort from the team helped CSK post 218 runs on the board in the first innings. Kieron Pollard’s 34-ball 87 denied CSK’s hopes of winning the game as MI chased down the target on the last ball of the match.

Here’s a look at how both these two teams have performed in the tournament thus far:

After making an early exit last year, Chennai Super Kings made a superb comeback in IPL 2021. They have been brilliant right from the start of the tournament. All the changes they have made have worked well for them. Faf du Plessis and Rituraj Gaekwad have been brilliant at the top. The duo has given some great starts at the top of the order and set the foundation for the middle order to capitalize. The decision to bat Moeen Ali at number three has proved to be a masterstroke. Moeen Ali has aggregated 206 runs in 6 matches at an average of 34.33. Faf du Plessis, on the other hand, is the team’s leading run-getter with 320 runs in 7 games at 64.

Add to that, Ravindra Jadeja and Ambati Rayudu have given the finishing touches at lower down the order. The duo has played some astonishing knocks and ensured CSK score plenty of runs in the death overs. MS Dhoni’s form is perhaps the only concern as of now. In 4 matches, he has only 37 runs to his name. How he performs with the bat in the rest of the tournament remains to be seen.

Deepak Chahar will continue to lead the pace attack. He has been their strike bowler in the powerplay with 8 wickets in 7 matches. However, the biggest positive in the bowling department is Sam Curran’s rise as a bowler. The Englishman took wickets in the power play as well as in death overs. He has 9 wickets in 7 matches thus far in the tournament and is the leading wicket-taker for CSK this season. 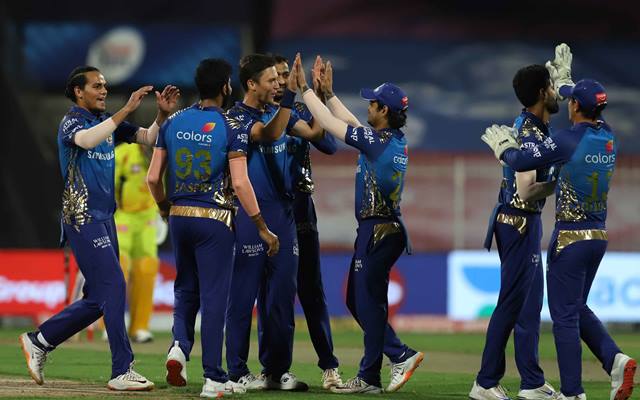 Mumbai Indians, the most successful team in the history of the tournament, haven’t had as good a season as they would have liked. Their first five games at Chepauk aren’t something they would want to remember. Barring Rohit Sharma, the batsmen struggled to hit the straps on the slow and turning track of Chepauk.

Their fast bowlers, namely Jasprit Bumrah and Trent Boult haven’t made as much of an impact as they would have wanted. Poor returns from Hardik Pandya, Ishan Kishan and Kieron Pollard is certainly a concern for them. MI haven’t been able to capitalize in the death overs so far. Though, they managed to make a comeback later after winning two consecutive games in Delhi.

Thanks to those two wins, Mumbai Indians currently find themselves at fourth position on the points table with 4 wins in 7 matches. The action has now moved to UAE and it will be interesting to see how they fare in the second half of the tournament.